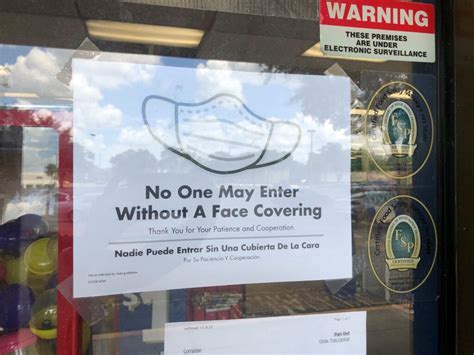 The tide is FINALLY starting to turn, as courts begin to address the myriad unconstitutional government infringements of our rights over the past year. The First District Court of Appeal in the State of Florida ruled today that the government can’t simply assert an “emergency” as a justification to violate our fundamental rights. The court further held that IF the government does indeed have a compelling interest in regulating behavior, courts must apply “strict scrutiny” to determine whether it has chosen the least-restrictive means possible to accomplish the desired result.

The case, Green v. Alachua County, was an appeal from a lower court ruling that denied Plaintiff Justin Green’s motion for a temporary injunction against the County to suspend enforcement of its mask mandate. The appellate court reversed the lower court ruling, saying that the trial court did not apply the correct legal standard of strict scrutiny to reach its decision.

In most circumstances, governments are given wide latitude and broad regulatory discretion, and courts will accord due deference to executive branch decisions about the extent of their authority to act, provided that there is “a reasonable, rational nexus” between the end sought and the action taken. However, whenever executive branch action impacts a fundamental right, the standard shifts from “reasonable, rational nexus” to “strict scrutiny” and the burden of proof shifts from the plaintiff alleging that his or her rights have been violated to the executive branch defendant to prove that it chose the least-restrictive means of achieving the desired objective.

Strict scrutiny entails a two-part test. First, does the government have a compelling interest in the regulation issued? An example of a compelling interest would be seizure and drainage of swampland that was a hazard to health, say by being a breeding ground for disease-carrying mosquitoes. Second, if the government meets the compelling interest test, did it select the narrowest, most targeted solution? In our swampland example, did the government seize the least amount of land? Were there other, less-restrictive alternatives, such as spraying insecticide? Or would spraying perhaps pose a bigger health risk than the mosquitoes? Courts frequently are called upon to conduct such balancing tests to arrive at the best solution for society at large.

In the instant case, the appeal court found that the trial court erred in two ways. First, it used the wrong case law and arrived at an incorrect legal conclusion as to whether the County had violated a fundamental right of Plaintiff Green’s and therefore placed the burden of proof on the wrong party. The Court of Appeal ruled that the correct legal analysis is that under the Florida Constitution, the right to privacy is fundamental and that the County’s mask mandate is presumed to be unconstitutional and that the County bears the burden of proving first that it had a compelling interest in issuing the mask mandate and second, that a mask mandate was the least restrictive means of satisfying that compelling interest. The appeal court further ruled that because the trial court had arrived at an incorrect conclusion about whether a fundamental right was involved, it applied the wrong legal standard of review.

Although written with dispassionate, sober language, any fair reading of this decision can only be described as a titanic smackdown of the trial court by the appeal court. (In fairness, this is because the appellate court had previously made the same mistake. The court even said as much in the decision, when it described the prior case and asserted, “We will not make that mistake again” with regard to assigning the burden of proof.) It reversed the trial court decision and remanded the case back for proper adjudication.

Although this was only a state-level case and not a Federal case, and despite the fact that the case will now likely be dismissed as moot by the trial court because Governor DeSantis has prohibited additional mask mandates in the state of Florida, the legal analysis presented by the appellate court here blazes a trail for lawyers in other cases in other states to follow. We have been told to expect similar rulings from around the nation on mask mandates and other issues as courts begin cleaning up messes that the federal and several state Executive Branches made in 2020.