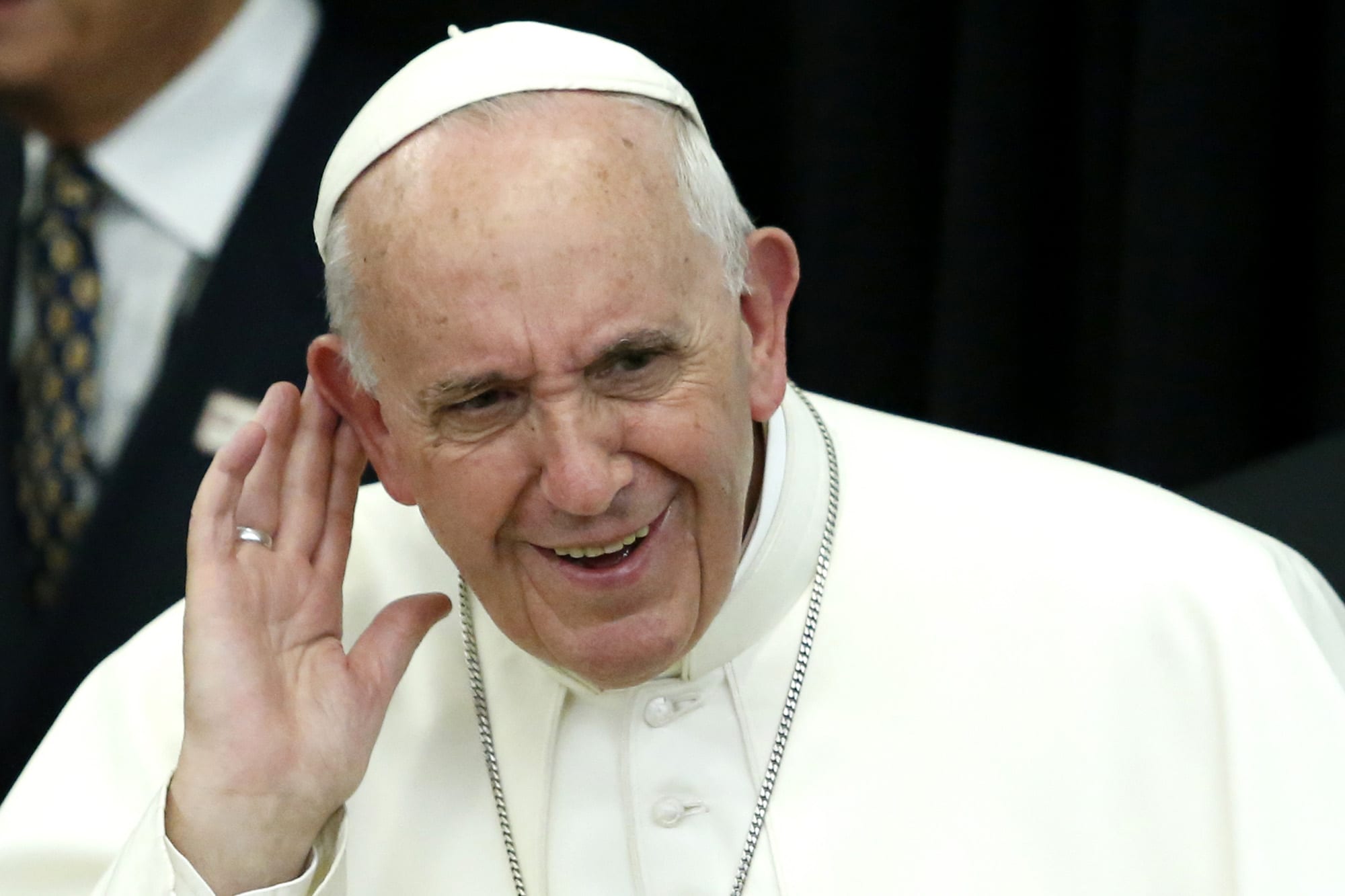 One of the doctrines of the Roman Catholic Church that is most misunderstood by non-Catholics is the Doctrine of Papal Infallibility. For all the non-Catholics (and poorly catechized Catholics) out there, allow me to clarify: No, we don’t think that the Pope is never wrong or that we are required to believe everything he says, or even teaches.

Common Misunderstandings of the Doctrine

Papal Infallibility is actually a very rare thing, as it should be. It does not mean that popes cannot sin or even that they cannot err in other ways. History is replete with popes who lived scandalous lives. Not even sainted popes have led sinless lives. We are all sinners who are only saved by the Grace of the Holy Spirit and the sacrifice of Jesus Christ on the cross.

It also does not mean that everything a pope says is correct. Popes may think and say and even teach things that are erroneous, either because they have been misinformed as to the facts to which they speak or have arrived at erroneous conclusions based on faulty logic.

The Doctrine of Papal Infallibility was first defined on 18th July 1870 in Pastor AEternus issued during the First Vatican Council, but it has been a tenet of the Church since the time of the Apostles. The doctrine of infallibility is implicit in these Petrine texts: Matthew 16:18 (“Thou art Peter, and on this rock I will build my church ”), John 21:15–17 (“Feed my sheep…”), and Luke 22:32 (“I have prayed for you that your faith may not fail”).

Christ instructed the Church to preach everything He taught (Matt. 28:19–20) and promised the protection of the Holy Spirit to “guide you into all the truth” (John 16:13). That mandate and that promise guarantee that the Church will never stray from His teachings (Matt. 16:18, 1 Tim. 3:15). It is this protection of the Holy Spirit that is key to understanding the Doctrine of Papal Infallibility.\n

Expression of the Church’s Magesterium

The Doctrine of Papal Authority is an expression of the Church’s Magesterium, its teaching authority to give the authentic interpretation of the Word of God, “whether in its written form or in the form of Tradition,” as set forth in the Chatechism of the Catholic Church. It does not arise out of the superior intelligence, wisdom, understanding, or virtue of the Pope, but rather from the promise Jesus made that the Holy Spirit would protect all Christian believers from erroneous teachings. \n

What the Doctrine Actually Holds

In order for invocation of the Doctrine of Papal Infallibility, the Pope, either sui generis or on behalf of an ecumenical council, must:

A) be speaking ex cathedra (literally “from the chair”) in his office as Supreme Pontiff, the shepherd and teacher of all Christians,

B) to define a doctrine (a truth) concerning a matter of faith and morals,

C) intended to be held by the whole Church (i.e., all baptized Christians).

Pretty stringent, and limiting, requirements. Hence, the rarity of its invocation. The most rigorous of these requirements is the last. A pope may speak ex cathedra on a matter of faith and morals, but if he is not declaring that the teaching so proclaimed is necessary for all baptized Christians (Roman Catholic and otherwise) to believe in order to attain salvation, then that teaching cannot be deemed to be infallible.

Only Invoked Twice in History

The limitations on invoking the Doctrine of Papal Infallibility are so stringent, there are only two solely Papal teachings, meaning apart from those that have been promulgated in concurrence with ecumenical councils, that the Church deems to be infallible (i.e., that must be believed by all baptized Christians in order for them to gain salvation).

The first, in 1854 by Pope Pius IX in Ineffabilis Deus, is the Doctrine of the Immaculate Conception. That Jesus, being God incarnate and therefore without sin, could only enter the world via a sinless vessel, Mary.

The second teaching held to be infallible, decreed in 1950 by Venerable Pope Pius XII in  Munificentissimus Deus, is the Doctrine of the Assumption of the Blessed Virgin Mary, which holds that the Virgin Mary “having completed the course of her earthly life, was assumed body and soul into heavenly glory”. (Note that it is not held to be an article of faith to believe that Mary did not die before being assumed into Heaven, merely that she was taken both body and soul.)

It is important to faithful Roman Catholics that the Doctrine of Papal Infallibility be clearly understood, so as to not draw accusations of heresy when we reject non-infallible Papal actions, opinions, teachings, or even the Pope himself.

Indeed, Galatians, Chapter 2 provides an example of papal fallibility, where St. Paul rebuked St. Peter for not dining with Gentile Christians, so as to not offend certain Jews. First, Peter’s actions fell outside the Doctrine of Papal Infallibility because they dealt with matters of discipline, not faith or morals. Second, the problem was Peter’s actions, not his teaching. Paul acknowledged that Peter very well knew the correct teaching (Gal. 2:12–13) and was chastising him for not practicing what he preached.

While we always respect the OFFICE the Supreme Pontiff holds we are not duty-bound to respect the Pope himself, either as a man or as a teacher, except in the very rare and rigorously limited circumstances outlined above.

Never in my almost six decades on this planet did I ever imagine that I would have no trust, no faith, and no respect for a pope. And then along came Francis.

I was skeptical from the start, being inherently distrustful of a Latin American Jesuit–the region and the order that literally invented the heretical, Marxist doctrine of “liberation theology”– but took a wait-and-see approach.

I gave his office due deference, as required, and even gave him the benefit of the doubt several times when secular media (intentionally, I believe) mischaracterized comments that he had made in order to further their regressive, Marxist agenda. His humble lifestyle was truly inspirational and I thought, maybe he is the messenger the Holy Spirit sent to condemn priests who sexually abused children and ensure that that never happens again, cleanse the Vatican of corruption, reform the Roman Curia (the Vatican “government”), and return Mother Church to her Apostolic roots. And he admittedly has made progress in each of these areas.

But all doubts about him vanished when he spoke for himself in 2015’s Laudato si’ (Praise Be to You), which pushed the false, Leftist global warming narrative, and 2016’s Amoris Laetitia (The Joy of Love), which was such a muddle of confusion on issues such as permitting civilly divorced and remarried Catholics (whose first marriages have not been annulled by the Church as having been invalid) to take Holy Communion. This latter document created such an uproar worldwide that four cardinals formally requested clarifications, to avoid teaching error.

It saddens us faithful Roman Catholics that this pope has become an embarrassment, especially with our non-Catholic Christian friends. And it’s gotten to the point that many of us in the laity don’t even listen to this pope anymore. #NotMyPope is an actual thing. He can think whatever he wants, say whatever he wants; and push whatever false, Leftist narrative he cares to push (he seems especially fond of condemning capitalism and shoving the global warming and CoronaCon hoaxes down our throats), but unless and until he speaks ex cathedra on a matter of faith or morals and binds all baptized Christians to that teaching on pain of losing salvation…he can go pound sand.