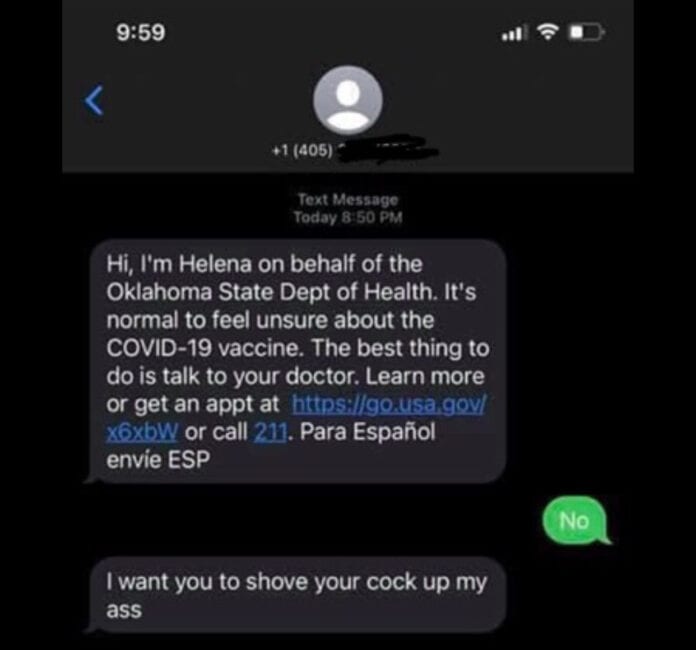 In a shocking development reported by Liza Greve of Oklahomans for Health and Parental Rights, both the Oklahoma State Department of Health and the Tulsa Health Department have gone rogue, and not in that good, Sarah Palin way that we all love.

One Oklahoma resident received a text from “Helena on behalf of the Oklahoma State Dept of Health” condescending that “It’s normal to feel unsure about the COVID-19 vaccine” and that “The best thing to do is talk to your doctor” before providing ways to “Learn more or get an appt.”

So far, so bad. It went downhill rapidly from there.

When the text recipient replied “No,” Helena replied, “I want you to shove your c*ck up my a**. Perhaps that’s the Oklahoma State Dept of Health’s official “Pride Month” reply?

Apparently taking a belt-and-suspenders approach to (attempted) indoctrination, “Jennifer on behalf of the Tulsa Health Department” reached out to another Oklahoman with “Just a reminder that there’s no-wait, walk-up Pfizer COVID-19 vaccine appointments available” with times and an address. So as not to miss transfecting all of Oklahoma’s illegal aliens who have cell phones, “Para Español envied ESP.”

Jennifer then proceeded to practice medicine without a license.

The Tulsa recipient replied “Hard pass!” to Jennifer’s text. She replied, “The COVID-19 vaccine has been thoroughly tested with tens of thousands of people of diverse backgrounds through clinical trials using the same standards as other vaccines to make sure it is safe.” Every assertion of that text is demonstrably false…and potentially could lead to adverse outcomes including death.

When our well-informed Tulsa then replied, “With over 4000 dead and 10000 hospitalized, it should be pulled!” To which Jennifer responded with an insipid “Stay safe!” Ummmm…that’s EXACTLY what people who aren’t getting one of these experimental gene transfection concoctions are doing: staying safe.

Let’s break this down. First, both the Oklahoma State Department of Health and the Tulsa Health Department–and by extension, Governor Kevin Stitt and Mayor George Theron Bynum IV, both Republicans–have created plausible deniability for themselves by out-sourcing this pesky task to a texting service company. Okay, OK, fair enough. I get it. Health Department staff should not be burdened with sending texts such as these. But why did you hire a texting services company to send texts pushing deadly poison in the first place?

Second, why are Oklahoma state and municipal governments (this effort is likely not confined to Tulsa) continuing to push the false narrative that these are vaccines (they aren’t) and that they have been “thoroughly tested” (they haven’t been)?

Actually, the scariest part of the Tulsa text is the assertion that the COVID-19 vaccine (as if there were only one and not several different formulations) has been put “through clinical trials using the same standards as other vaccines to make sure it is safe.” If that statement is true, I completely understand why Robert F. Kennedy doesn’t want his mother to be transfected. In actual fact, the companies pushing these poisons were permitted to skip essential testing in the mad dash to start jabbing people. Giving people “the jab” IS the Phase III clinical trial!

When Vaccines Are Not Vaccines

The biggest lie about these injections is that they are vaccines. They aren’t. They are a gene transfection experiment. A vaccine is defined as, “a suspension of attenuated or killed microorganisms administered for prevention, amelioration, or treatment of infectious diseases.” None of the formulations being given to millions of people contains “attenuated or killed microorganisms.” In sharp contradistinction, these injections are potentially lethal cocktails of SM-102, toxic polyethylene glycol (PEG), and mRNA derived from aborted fetal cells. They are not vaccines.

Transfection is defined as “the process of artificially introducing nucleic acids (DNA or RNA) into cells, utilizing means other than viral infection.” That is what these various formulations (both of the Pfizer formulæ and the Moderna formula) do: they artificially introduce mRNA into cells using a nanogel carrier agent. And ALL of them are merely permitted under Emergency Use Applications (EUAs); none are approved. They are experimental and the people “getting the jab” are the guinea pigs. Like the two Oklahomans who received these texts, I choose to remain in the control group.

In 1976, universal administration of the Swine Flu vaccine (which was an actual vaccine) was halted after 53 people died following vaccination. As of 28 May 2021, there have now been 17,619 hospitalizations and 5,165 deaths reported to the CDC’s Vaccine Adverse Event Reporting System (VAERS). And counting.

So there have potentially been over 500,000 deaths from these injections…FAR more than the number of people who actually died from COVID-19. (CDC itself said the actual number of deaths from COVID-19 was approximately 4% of the death totals breathlessly touted 24/7 by the legacy media.)

The in-the-know recipient of the Tulsa Health Department text knew this. The big question isn’t why hasn’t Beijing Biden’s Federal Government stopped the mass-transfection experiment. The big question is why are Oklahoma and Tulsa still pushing these toxic injections on their citizens?

Contact Governor Kevin Stitt and Tulsa Mayor George Bynum and tell them to stop pushing propaganda and terminate the text programs. And also tell them that both Helena and Jennifer need to be fired by the texting companies the Governor and Mayor hired to do their dirty work. Holding Helena accountable for posting obscenity is not “cancelling” her. Likewise, holding Jennifer accountable for pushing demonstrable lies is a necessary corrective action.

How You Can Protect Yourself and Your Loved Ones

The good news is that you can protect yourself from damage done by the artificial SARS-CoV-2 spike protein, whether you received one or more of the experimental injections or are exposed to them in the environment.

Visit flccc.net and americasfrontlinedoctors.org for information and telemedicine resources, so you can protect yourself and your loved ones from potentially lethal outcomes of being around people who have received one of the experimental injections.