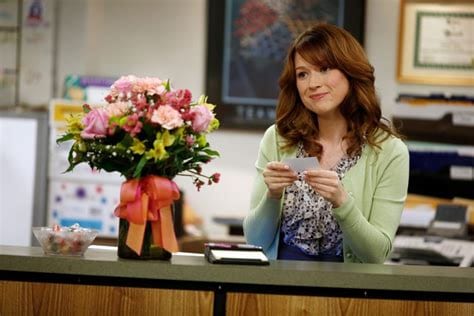 Just this weeKKK, the WoKKKe Mafia laid KKKlaim to another viKKKtim. This time, the lead actress in The Unbreakable Kimmy Schmidt. It doesn’t matter that Ellie Kemper is a smart, funny, independent, successful woman. Or that she starred in a show that highlights a beloved black queer character, just as Pride Month begins. All that matters is that the actress once took part in a beauty pageant with tenuous, maybe-possible racist historical roots. Her unpardonable sin? She was crowned Queen of the Veiled Prophet Ball in St Louis, MO…TWENTY YEARS AFTER IT WAS INTEGRATED!

It’s too bad Ms. Kemper isn’t the Democrat governor of a Southern state. Then she could have pictures of her in blackface or even a KKK hood without having to step out of the public eye. Take Virginia Governor Ralph Northam, for instance. His only defense when pictures surfaced showing a man in blackface next to a man in a KKK hood and cloak was that he couldn’t remember which racist outfit he wore to that fraternity party. His endemic structural racism was forever memorialized in a 1984 Virginia Medical School yearbook. Hard to slough that off as a teenage indiscretion.

Northam’s saving grace was that all other high-level Virginia Democrats were mired in even more scandalous accusations. He ignored multiple calls to resign and is serving out his term today, as are embattled Lieutenant Governor Justin Fairfax (accused of sexual assault by two women) and Attorney General Mark Herring (another blackface devotee). Being a DemoKKKrat means never having to suffer the consequences of your actions.

As if to out-do Northam’s own hypoKKKrisy, his neighbor to the South, Roy Cooper, criticized Northam despite his own 1979 yearbook having celebrating blackface and lynch mobs in fraternity life! And yes, this was widely known before nearly every other statewide Democrat was rejected by the voters of North Carolina in the 2020 eleKKKtion, yet KKKooper was reeleKKKted with flying KKKolors. Heck, even friend of segregationists Joe Biden would celebrate him for disastrous pandemic lockdowns and draconian government mandates, as he did with Ralph Northam this week. Next stop for Northam and Cooper may be the US Senate, where Biden shamelessly preached racial harmony and practiced racial division.

(On the subject of embarrassing yearbook photos – “ACAB” was printed in a Newcastle, OK yearbook… so now it’s cool to throw cops to the Woke lynch mob? You’d mob me for suggesting “All Democrats are Racist,” but we celebrate students denigrating “All Cops…”? But I digress.)

Also this week, Joe Biden visited Tulsa, OK for the 100th anniversary of the Greenwood “riots.” How the history is taught (or wasn’t for most of the past 100 years) by a state historically run by DemoKKKrats is still a sore spot for Oklahoma’s black (and white) population. Like Portland, past racist policies encouraged blacks to settle in other booming cities. The real and lasting sad legacy of Portland and Tulsa is the vibrant communities that simply chose not to settle and thrive there. While Oklahoma tries to reconcile with its past, Virginia and North Carolina DemoKKKrats ignore and excuse theirs.

Where is the Woke mob in the South? Busy burning black-owned businesses. Roy Cooper did nothing to quell 2020 violence in capital city Raleigh, just as historic DemoKKKrats had encouraged the Wilmington riots and the Tulsa massacre. From Raleigh to Portland, Wilmington to Greenwood, the playbook is the same: do nothing to actually elevate women and successful minorities, while turning a blind eye to the actual racism of those too inconvenient to hold accountable.

There is one racist institution that rich, white liberals passionately continue to support above all others (sorry Planned Parenthood, not you). This institution created segregation, mastered the use of voter intimidation and lynch mobs, and opposed Reconstruction, the Civil Rights Act of 1964, and integration. It voted against freeing the enslaved, against granting them citizenship, against letting them vote, and for “separate but equal” Jim Crow laws. It was the heart and soul of the many iterations of the Ku Klux Klan. Yes, I’m talking about the DemoKKKrat Party.

And not just historically. Until his death in 2010, the Klan could count Sen. Robert Byrd of West Virginia amongst its most powerful alumni. Byrd wasn’t just a member of the KKK, he was an Exalted Cyclops, a chapter president. And despite disavowing the Klan when it became politically expedient to do so and dismissing his Klan activities as a political necessity, Byrd filibustered the Civil Rights Act of 1964 for 14 hours on the Senate floor. Verba non acta.

But Bob Byrd was a DemoKKKrat, so its all good! Hillary Clinton idolized him, calling him “[her] friend and mentor.” Joe Biden–no stranger himself to racism–eulogized the former Klan leader at his funeral.

Falsely believing in a Southern Swap where all the racists magically disappeared into the Republican Party is disingenuous and dangerous. I have more evidence showing that all Southern racists moved to Portland, OR. And if the Southern Swap was real, how do you explain Joe Biden’s positions in the 1970s, hailing from “safe from racism” Delaware/Pennsylvania, or honestly reconcile them with his myriad racist true beliefs today?

If the Woke mob really wants to upend everything that used to be tied to racism, why do they vote for, fund, and perpetuate the Democrat Party? True, a rose by any other name may still smell as racist, but why does this one institution get a pass? Because it’s their power source. It’s a lot more fun to make actresses genuflect to your ridiculous accusations…and a lot less risky to your bottom line.

Before toppling the next statue or renaming the next “somewhat connected to slavery” elementary school or civic festival, perhaps Woke Progressives should focus their attention on laws and policies that actually counteract minority success? Instead, we have white, progressive, self-deluded “saviors” willing to speak for the black man without actually asking him to speak for himself. Joe Biden is merely the pinnacle of systemic racism, yet the Democrat Party cannot call out its own sin. Biden and Northam have logs in their own eyes, while Woke social media calls out Ellie Kemper’s speck.

Ellie unwittingly encapsulated this entire issue in her abject apology: “If my experience is an indication that organizations and institutions with pasts that fall short of these beliefs should be held to account, then I have to see this experience in a positive light.”

So… the Democrat Party should be held to account for its past and present racism? Is that what you are saying, Ms. Kemper?

As it has often been said, if it weren’t for double standards, Woke Democrats would have no standards at all.

Or join the debate here:

Debunking the “Republicans and Democrats switched sides due to the Southern Strategy” myth: Conservative

Joe Biden didn’t just compromise with segregationists. He fought for their cause in schools, experts say.

How a Young Joe Biden Turned Liberals Against Integration

Roy Cooper is another hypocrite governor on lockdown restrictions

- Advertisement -
Share
Facebook
Twitter
Pinterest
WhatsApp
Telegram
Previous articleEp42 – Bill Robinson: The CoronaCon Was An Attack On the West By Sociopath Xi and the Beijing Bunglers
Next articleProposed 28th Amendment to the U.S. Constitution: Term Limits and Age Limits