The Bigger Picture – What Was REALLY Behind All Those Doctors Being Censored, Slandered, and Suppressed? 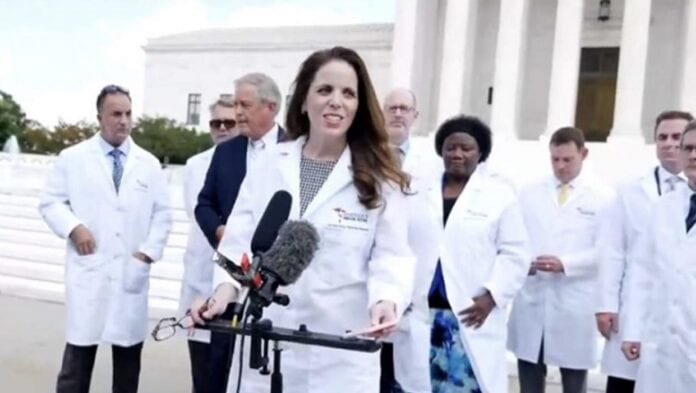 As a Media Booker that books Conservative, Christian, and Veteran voices on TV & Radio, I already have a challenging job. The Covid Madness, Big Tech Censorship, and Media Silencing of anyone who went against the Fauci narrative (which all of my clients did) made my days exceedingly difficult. There was one trend in media booking in 2020 / 2021 that really made me angry though: the complete and utter suppression of doctors’s voices.

I’ll never forget the day when the new group of practicing physicians called “America’s Frontline Doctors” held a press conference in front of the Supreme Court in DC.  It was so refreshing to hear from someone other than Dr. Swamp Fauci. When I tried to share their great press conference video, Facebook removed it, covered it, and told me those people were bad people and to not listen to them. “Fact Checkers” pounced, telling me I hadn’t seen what I had seen with my own two eyes. Stay Away! Dangerous Information!

So I did what any red-blooded American would do. I got super-curious about why these doctors were being deemed frauds and fakes, yet Drs. Fauci and Birx were constantly celebrated and never questioned.

And then I saw the story about how two doctors in California rose up against the lockdowns, and got summarily shut down. I saw the President of the United States talk about how great hydroxychloroquine was, only to have everyone in the legacy media call him a fool. Only later, after thousands of lives were lost, was it proven President Trump was correct. A Henry Ford Health System study showed that  treatment with hydroxycloroquine cut the death rate significantly in COVID-19 patients. See how deadly dangerous TDS can be?

And then Dr. Scott Jensen put out a video about how the CDC was hyping the death count by changing the way hospitals and morgues counted COVID-19 deaths, to include people dying “with” and “from” the virus. So in other words, you could die because of a car wreck and if the PCR test they ran on your corpse was positive, count it as a COVID death.  And what Dr. Jensen shared was correct information. For going to the trouble of telling the truth, his medical license was threatened and the CDC put him under investigation.  (PCR Tests are invalid as a way of testing for SARS-CoV-2 infection, but I digress).

Dr. Richard Bartlett in Texas stood up and said he was using an effective treatment in two hospitals and was clearing out ICUs with an inhaled steroid called Budesonide.  This should be ALL OVER THE NEWS…right?  Nope. Despite Dr. Bartlett’s credentials as an emergency medicine physician in West Texas who served under Governor Rick Perry on the Texas Health Disparities Task Force for seven years, receiving a Meritorious Service Award from the Texas Department of Health and Human Services, and despite his success treating COVID-19, this doctor was not celebrated in the press. His information was not spread world-wide, which literally could have saved lives. No. Instead, he had his medical license threatened and was labeled and libeled as a “snake oil” salesman.

Personally, I had a doctor that was scheduled to go on a National TV program to talk about the benefits of boosting your immune system with Vitamin D and Zinc. Dr. Eric Nepute was all set to go on TV, until I got a call from one of the show producers that summarily unbooked and blackballed him based on a Google search. You see, Dr. Nepute holds the distinct honor of being the very first doctor attacked by the cabal of Big Gov, Big Pharma, and Big Media.

Dr. Nepute is the first person sued by the Federal government under the COVID-19 Consumer Protection Act, a two-section “statute” rammed through Congress with the first “COVID stimulus bill.” It accused him of deceptive advertising practices…for telling people about the scientifically proven health benefits of Vitamin D3 and zinc. The Federal Trade Commission’s lawsuit claims that Dr. Nepute used “false information & fear” to get people to buy vitamins. The reality is that the only ones who have used fear to push false information are the federal government, the pharmaceutical companies, and the mainstream media.

The Federales have infringed Dr. Eric Nepute’s First Amendment right to freedom of speech. They’ve also attempted to take away his ability to maintain an oath he holds sacred as a doctor: to first do no harm.  Dr. Nepute has literally given away over 2 million bottles of vitamin D and zinc to people all over the United States during this crisis. Sounds like a really bad person, eh?

The Government originally came after Dr. Nepute for over $8 million in penalties. Additionally, they have libeled him and attempted to discredit him through the associated press and national media.He was repeatedly un-booked from scheduled national interviews once producers read the false government propaganda on the Internet. Government agencies attacked Dr. Nepute’s character, defamed his name, and used him to try to make an example to silence and suppress other doctors who speak against the false COVID-19 narrative of Big Gov & Big Pharma.

The Big Question Is Why?

It wasn’t too difficult to see the trend. Any doctor or organization that rose up with a solution or information that challenged or even questioned the Gospel According to Fauci was summarily, and with extreme prejudice, shut down.

But why? What is the bigger picture? What’s REALLY going on?

Attorney Thomas Renz, who has been fighting this COVID Chaos for over a year, finally showed me why all of these doctors were being silenced. And it boils down to this: like in every single villain movie, money is at the root of the evil being done. Johnson & Johnson stands to make $10 Billion in 2021. Pfizer’s haul will be a cool $15 Billion. And Moderna? A company that had never successfully gotten an mRNA vaccine approved by FDA? A company that was allowed by Tony Fauci to skip critical animal studies of safety and efficacy? Why they’re going to be king of the heap at $18 Billion. And guess who owns half of the Moderna vaccine? That’s right, the Federal Government.

Legally, if inexpensive, readily available, proven-safe treatments for COVID-19–such as Budesonide, Ivermectin, Hydroxychloroquine, Vitamin C, Vitamin D, and zinc–had been accepted as a cure by mass media, Big Gov, or Big Tech…then bye-bye Big Vaccine Money. Fauci would not get his precious FDA Emergency Use Authorization if the legitimate information these hero doctors were providing was allowed to see the light of day.  And as Bill “NOT A DOCTOR” Gates has told us, “Vaccines are a great investment. 20-to-1 returns.” He has his hands in all the pots.

Dr. Fauci’s vaccine, Moderna, stands to make over 18 Billion dollars just in 1 year. NIH gets royalties on every shot. If you google that, The NON-MEDICAL “fact checkers” will proclaim it’s untrue, but the truth is starting to leak out and there’s much more to come for the Swamp Doc. His emails will look like child’s play once “the contracts” are revealed. Stay tuned.

I say all this to remind you that Big Pharma is bad. Always has been, always will be. That’s not new. What is new is Big Pharma has cozied up to three other notorious bad guys; Big Gov, Big Media, and Big Tech. They are using their monopolies to squash regular doctors trying to help you, the American people.

And they are doing it for dollars. Billions and billions of dollars.

Well, let’s hope it’s just greed that is motivating them. With all these people dropping like flies from the experimental gene therapy injections, it very well could also be motivated by their desire to depopulate the planet to pave the way for a Klaus Schwabian “Great Reset” and usher in world government. Gates has strong ties to the Eugenics movement, and very openly admits he believes he could and should “depopulate” (i.e.: murder) people.

Such a nice guy. So much better, according to Big Tech, than Drs. Eric Nepute, Simone Gold, Richard Bartlett, Scott Jensen, and all the other Hero Doctors that stood up for us.