The Most Prolific Serial Killer In American History: Anthony Fauci 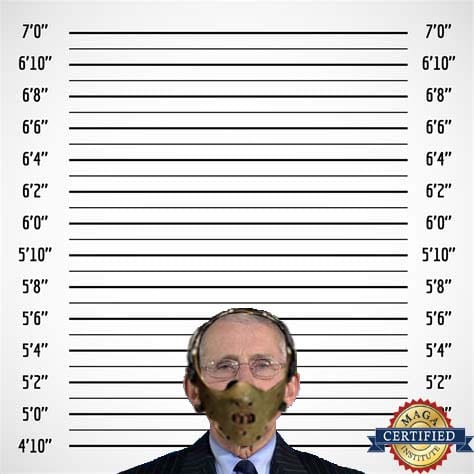 I can’t decide where I want to start this diatribe, so I’ll just shotgun-blast it out in the same way we were all blasted last year beginning in March. And. Even To. This. Day. June 2, 2021.

We endured hit after hit after hit, like earthquake aftershocks. First, everything MUST close down for 15 days to slow the spread. A LIE. Then, three weeks to flatten the curve. A LIE. Then, mask up to protect others. A LIE. Then, stay home to save lives. A LIE. Don’t hug or see grandma to save her life. A LIE. You are an asymptomatic carrier! A LIE. Now, we must get 70% of Americans vaccinated to return to normal. A LIE.

The elderly were among the most brutally damaged in this international crimewave. The nursing home residents with their wheelchairs at the doorway, hoping just to see other people. The plastic encasing their family members, if they were even allowed inside any nursing home or hospital. The countless numbers who couldn’t see their loved ones before they passed. Makes me want to vomit as I sit here and recall all the EVIL things we endured. WILLINGLY- as a people. I say willingly because we didn’t exactly rise up en masse and put any kind of organized stop to it.

The little elderly lady who was looking at the ocean on the beach in Kauai…and received a $5,000 ticket because she was SITTING on her walker. The order (for those five minutes, as the goal posts were constantly moving) allowed for outdoor exercising only. Sitting at the beach became a violation by diktat.

My husband and I often went swimming in the ocean. Heaven forbid we simply wade. The DLNR (Department of Land and Natural Resources) used their brand-new, COVID-stimulus-paid waverunners to make sure you were actually swimming and not just wading. Wading was a violation.

The beach patrol of the Honolulu Police Department likewise terrorized beachgoers on their brand-new, COVID-stimulus-paid four-wheelers. Their life-saving mission was to verify that your okole (Hawaiian for butt!) wasn’t actually on the sand. There was even a paid advertising campaign that ordered the plebes to “Keep Your Peach Off the Beach!” I’M NOT EXAGGERATING. You just can’t make this stuff up.

Non-compliance Was Not Rewarded

Not everyone capitulated. Many of us sued the powers-that-be, as I did. (But to no avail when courts are riddled with corrupt globalists, as well.) My ReOpen Hawaii partner, Jason Jones, was arrested at our first protest at the Hawai’i State Capitol on May 1, 2020. Many others were ticketed for “public bio-hazard.” Yeah, that was a thing. A misdemeanor for being outdoors at the State Capitol protesting ILLEGAL, ANTI-CONSTITUTIONAL ORDERS by the Governor and the then-Mayor of Honolulu.

The Worm Has Turned

FAUCI HAS BEEN EXPOSED!

His email leaks are golden. And they don’t surprise those of us who have known the Truth all along.

Senator Rand Paul has been relentless in his quest to have Fauci answer for his crimes against humanity. And the wheels finally came off the CoronaCon with the email release.

Think about this. Anthony Fauci was accused early-on by Judy Mikovits as being a mad scientist. The first time I heard of his prior dastardly deeds was when she told her story about how Fauci’s lies destroyed her career and improperly landed her in jail. That Truth was a tough pill for most people to swallow in the beginning. After all, he was standing with President Trump daily on the press room dais. Naturally, Judy had to be deplatformed and labeled a kook.

She wasn’t the only one. President Trump and Fauci didn’t agree on the treatment for COVID-19 (And there was one!). Early in the Scamdemic, President Trump suggested early treatment with HYDROXYCHLOROQUINE (HCQ) could be effective, only to be denigrated and maligned by the WHO, FDA, CDC, and Fauci himself using fraudulent and fake findings published in the Lancet, a renowned medical journal. Or it used to be renowned, before it had to retract its lies about HCQ. But the damage was already done.

If President Trump’s and the Frontline Doctors’ suggestions to treat COVID-19 early with HCQ, Ivermectin, or nebulized budesonide had just been accepted by the legacy media as good science and responsible medicine, half a million American lives could have been saved.

Half a million or more American lives could have been saved if only the media and the global medical community weren’t out to get President Trump. Or to kill us.

At the time of this writing, 560,000+ lives have been claimed to have been lost due to COVID-19. That is just one of the reasons the so-called “vaccine” is being pushed on you, to the point of shaming you if you think it might not be as deadly a virus as they assert. Or if you just think, “Hmmm, maybe I’ll wait a little longer given that these are clearly experimental trials, which no one can deny.” No one except the corrupt and deadly media, who have dollar signs coming from Big Pharma dancing in their craniums.

These Have Been Crimes Against Humanity

All of this is a crime of the highest degree. From the creation of the bioweapon known as SARS-CoV-2 to the fake and dangerous “vaccines” touted by almost everyone as “safe and effective.” What is safe and effective about 4400+ American deaths and 200,000+ adverse reactions per VAERS, the CDC’s own vaccine adverse effects reporting system? I haven’t even mentioned the adverse reaction count in Europe. It far exceeds ours.

Crimes against all of humanity. But who will pay for it? Will there ever be justice?

To say that Fauci and company should be STRUNG UP is not hyperbole. 560,000+ dead Americans. Millions worldwide. All for Fauci’s gain-of-function research and subsequent “vaccine”….

You’ve heard follow the money, yes? It always leads to the culprit. Create a crisis only to solve the crisis. That’s precisely what we have here. A mad scientist looking for a way to make billions. His friend Bill Gates already eagerly told us, “The vaccine industry has a twenty-to-one ROI.” So why not, right?

Fauci is closely tied to Moderna. Moderna has NEVER BROUGHT A VACCINE TO MARKET. Read that again: Never. And now we’re supposed to believe that a technology that has never been approved in thirty years is suddenly, magically “safe and effective”? Seriously?

All of Big Tech, Big Pharma, and Big Government are to blame for the dead. And they want millions more dead too. Euthanasia is their sacrament; the jab is their latest Eucharist.

Save Yourselves, Your Family, and Your Posterity

Please avoid it at all costs.

Fauci and company are dangerous serial killers. And should be treated as such. I said that today on the ridiculous social media platform that we just can’t seem to quit. And it got me another 30-day ban.

And let’s survive this mad, dystopic, alternate reality together.

With Joe Biden in the White House, Terrorists Rejoice