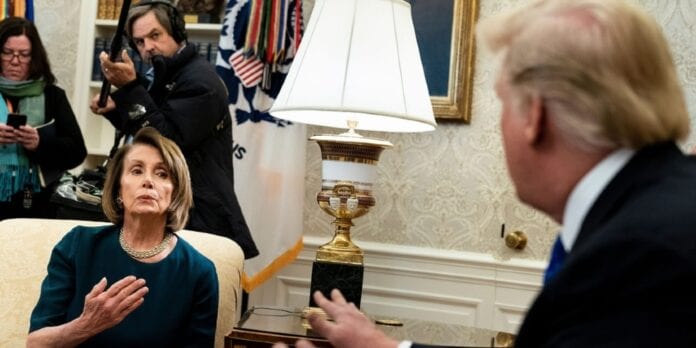 It is the late evening of November 8, 2022. Rather than a Grover Cleveland maneuver, Donald Trump pulls a John Quincy Adams technique. Rather than just running for a second non-consecutive term in 2024, he wins the race to become a U.S. Congressman from Florida in the general election of 2022. Just as our 6th President was elected to the House of Representatives in the election following his defeat for re-election as President, now our 45th President has done likewise.

But whereas Adams served 17 years in the House and became an elder statesman there, Trump’s initiative is quite different. The renewed conservative majority in Congress overwhelmingly gives Nancy Pelosi her walking papers and elects freshman Congressman and former President Donald Trump as Speaker of the House.

By also retaking the U.S. Senate, Republicans have ensured a majority in both Chambers on Capitol Hill. Many are still feeling the guilt of their ineptitude to preserve the re-election of President Trump in the 2020 election via the constitutional process.

Even as of this writing, it is abundantly obvious that Joseph Robinette Biden is not up to the job that he holds. It isn’t just his fumbling over words or his inappropriate solicitude toward young children.

One even now wonders what the United States military is thinking in anticipation of the event when the constitutional Commander-in-Chief with his finger on the nuclear button makes a rash inappropriate judgement call in the few moments allotted which could result in a nuclear winter from which the world would never recover.

One likewise realizes that even Democrats gave Kamala Harris very low ratings in the Democrat primaries. Many are thus apprehensive about her total unpreparedness to preclude such a cataclysmic event if she should become our 47th President.

Preventing nuclear war is not the only issue at hand, but it is the one with the most severe, irreversible, immediate consequences. So, when Donald Trump becomes Speaker of the House, immediate impeachment proceedings are initiated against President Joe Biden. It was 130 years between the impeachment of Andrew Johnson and Bill Clinton. Then barely two decades later, Democrats tried this against Donald Trump twice and failed each time.

The impeachment of Joe Biden will be the first one in American history to result in a conviction. In fact it will be a very short trial with an overwhelming majority well above 2/3 of the Senators voting to remove the incumbent president. When Kamala Harris then is elevated into the empty presidency, her nominees to become replacement VP will be delayed and thwarted. Impeachment proceedings against President Harris will begin immediately. The result will also be very quickly arrived at with the same results of removal from office.

Then Speaker of the House Donald Trump will be the first person in United States history to fulfill the constitutional role of that position to become President after the removal of an incumbent President and Vice President. It has been provided for in the Constitution all along, but it finally becomes a reality.

The 22nd Amendment provides that a person who becomes President more than two years into the term of his predecessor may run again for another term of his own. In other words, completing Joe Biden’s term will not count as a second term for Donald Trump because it will be for less than two years and he will be eligible to run again for re-election for his own second term in 2024.

The urgency at the moment is that America survive the next year-and-a-half under the Biden-Harris Administration. There is really no logical reason for Donald Trump not to do as outlined here. He does not have to wait until the next Presidential election in 2024. By Republicans regaining the majority in both the Senate and the House of Representatives, and by Donald Trump being elected to the House, and then as Speaker of the House, this whole timeline to Take Back America can be truncated by two years.

I have stated this scenario in the future tense rather than conditionally. It can definitely happen. Whether it will is entirely up to you and me. Our part is to ensure that Democrats lose the majority in both chambers of Congress. Then, we pray and wait for President Donald Trump to make his announcement.

When Trump moves from Speaker of the House to President of the United States, there are a lot of excellent recommendations for him to appoint as new Vice President, positioning that person for a run of his or her own in 2028. Those of you Republicans thinking about running in 2024 should reorient your mind to consider almost six years as Vice President. You will most assuredly do better in that job than did Mike Pence, who needs not apply for anything herein suggested.

If this seems far-fetched to you, it is 100% plausible. You can sob tears in your beers for the next three years, or you can do something worthwhile and adopt an attitude of positivity. All of you Democrats with buyer’s remorse can come out of the closet now.

This article was originally posted on NOQ Report.